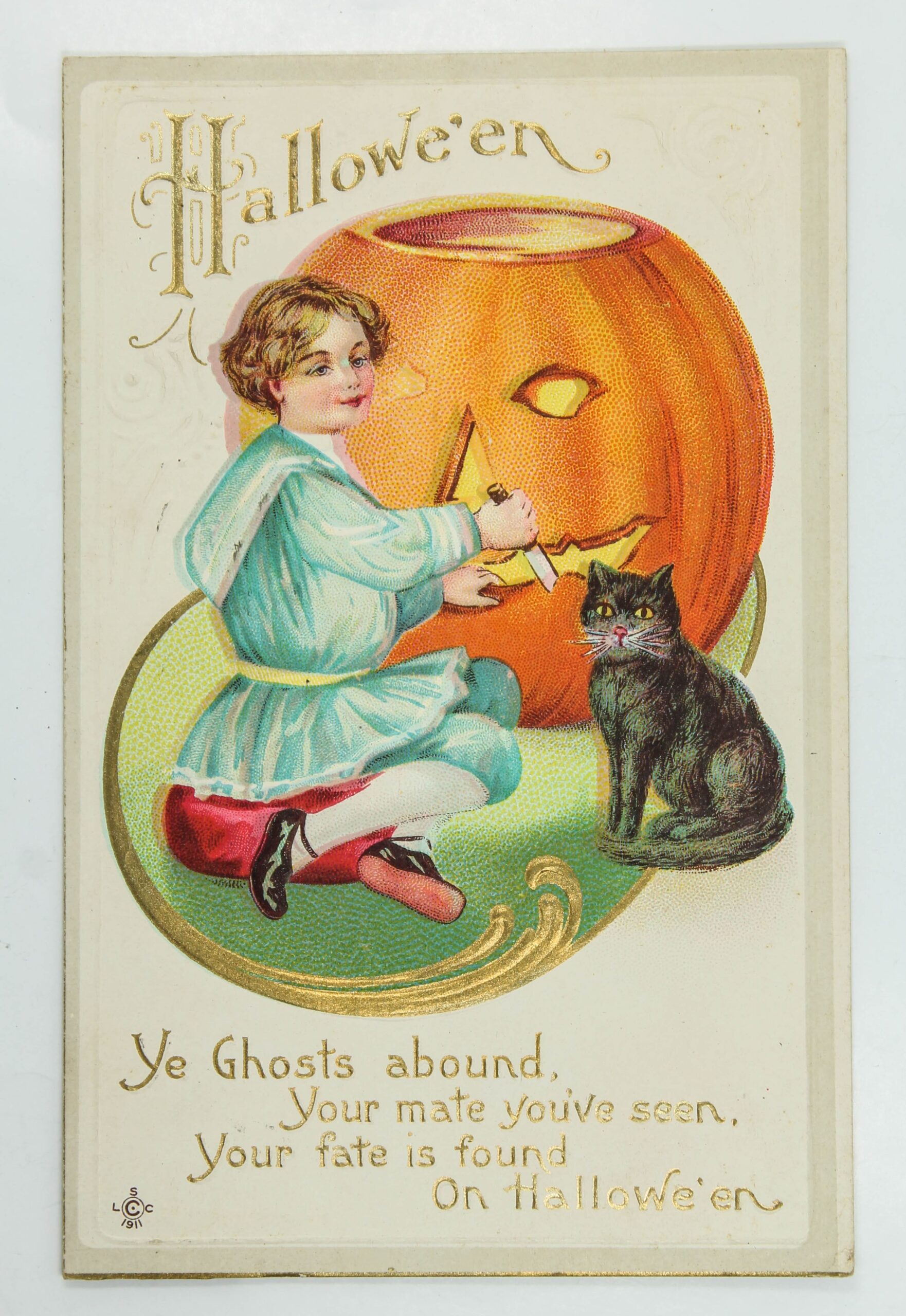 Before you look at Victorian Halloween, know that the origins of Halloween can be found in the ancient Celtic festival of Samhain.

November 1 was the start of the New Year for the Celts. It was a belief that the night before was a time when the veil between the worlds of the living & the dead was thinnest. New Year’s Eve was the day when the spirits of the dead wandered, and one could more easily communicate with them to guess the future.

Halloween was celebrated with bonfires and parades, with people disguised as animals or wearing masks to deceive wandering spirits. Food and a lighted candle were also left on the doorsteps to feed visitors on the other side.

A custom-developed which consisted of distributing small cakes to the poor, called “cakes of the soul.”

The second half of the 19th century saw many Victorians trying to reduce the spooky or spooky aspects of Halloween and make it cuter.

Halloween is a festival celebrated annually on October 31. On Halloween nights, people celebrated it by feasting, playing games, dancing, telling ghost stories to friends and family who gathered to enjoy this day.

The difference between Halloween & other celebrations is the costume worn. On Halloween nights, people dressed as supernatural beings like vampires, skeletons, witches and demons, etc.

Game parties were heading to celebrate the harvest, where neighbors shared stories about the dead, told each other’s fortunes, and danced and sang. Colonial Halloween festivities also involved telling ghost stories and doing all kinds of nonsense.

In (us) America in the late 1800s, Halloween was seen as a holiday more focused on community and neighborhood gatherings. Later in the century, Halloween parties for kids and adults have become the favorite way to celebrate.

Newspapers and community leaders have encouraged parents to remove anything “scary” or “grotesque” from Halloween celebrations. Superstitious and religious accents were soon replacing. The parties started to focus on games, such as Pin The Tail On The Donkey, Blind Man’s Bluff, Bobbing for Apples, foods of the season, and party costumes. Then there was a treasure hunt where boys and girls could pair up and search in the dark. Fortune-telling and games to guess your “true love” were popular.

One popular game was Halloween pudding. In this game, the host would bake a fruit cake with five hidden objects inside: a ring, a coin, a thimble, a button, and a key. To

At 9 p.m., the oldest person silently cut the cake and gave the pieces. The first words are spoken after the cake was cut would be prophetic for the year. The person getting the coin with the ring would get married that year, the coin would be rich, the button would meet their love, the key would go on a trip, and the thimble would be an old maid/bachelor.

One game involved a single woman walking into a dark room on her own with a mirror and a candle. She would take an apple with her and peel it in one piece or slice the apple. It was believed that the face of your steadfast love would appear in the mirror. If you were to die that year, a skull would appear.

Then there was a game where the young women would go one by one to a dark room, which was supposedly haunted, with a chest of drawers with boxes. They would then go into the room in silence and pick up a package from the drawer (which was filled with party favors for the guest) without shouting.

The Recasting of Halloween

Children’s magazines published pretty pictures of fairies and witches; women’s magazines looked at how a Halloween party was organized: decorating ideas, what foods to serve, how to break the ice. In 1881, St. Nicholas Magazine sounded the death knell for the “authentic” old world holiday: “… belief in magic is dying out, and the customs of AII-hallow Eve have come to an end. stage; because they have become simple sports, repeated year after year like the end of year celebrations.”

Halloween celebrations in the Victorian era seem to be part of romantic inspiration, reconstructed history, and Victorian marketing. Halloween stories have become almost lyrical when it comes to passion and less concerned with real ghosts. In and among the stories offered to female readers, which had titles such as “Seed Hour and the Harvest of Love,” “Love Lies A-Bleeding,” and “If I Were a Man, I Would Shoot Me, “Are gems like” The Hallow-e’en Sensation in Gov’ner Dering. “In this tale, the are heroine is determined to live without love because she believes that the man she loves is not don’t worry about her; she takes on the challenge of entering a dark and secret passage on Halloween night.

To the unknown! [To the unknown!] Dear friends, wish me good luck. If I come back as I go, in love and alone, then I utter Hallow-one’s promises in false mockery and devote myself to charity for the rest of my life; if I achieve what I am looking for, if I discover a shadow which will lend me to a solution of this mystery, then to him will be devoted the own will, the stubbornness, the obedience and the love of Charlotte Garnett. !!

The lady disappears, the guests get scared, but the hero climbs into the dark after her, finding her frail form crumpled and passed out from a fall. Love follows; Halloween triumphs.

Victorian storytellers often used historical Halloween divination games as devices to mix up their lovers. (Most of these divinations were probably taken directly from Burns’ viral and widely reprinted poem; his “Halloween” had detailed notes describing how to perform each of the rituals he told.) The heroines ate apples at midnight on Halloween day while looking in a mirror for the face of a future husband. They followed unrolled balls of wool to dark barns and cellars, falling helplessly into the arms of a gallant hero. They would cook silly dinners, attend romantic and raging bonfires, put nuts on grills, and even buy apples. As evidenced by another “women’s magazine” tale, Halloween was just an excuse, a background, for the passion unleashed in the dark of the night:

Ethel: (alone) Oh, my lost, my unknown lover! When I took on the duties of hospital reader, how little did I think they were to put me in touch with the greatest happiness and the greatest misery of my life! (turn the lights off)

(The clock strikes midnight. Ethel takes the apple and walks to the mirror.

The door opens, and a man, covered in snow, enters the room.)

Mark Waring: (shaking himself) It’s luckier than I expected. I thought they were all going to bed. There was a light here a while ago. (Goes to the fire.) It’s cold! I thought we would never get here.

(She bumps into Ethel eating her apple in front of a mirror.) Hello! II beg your pardon! (Ethel turns and shouts.)

Ethel: (covering her face with her hands, pulls back) It’s her mind! Oh, I’m being punished for my insanity. In the name of heaven, leave me!

Mark: (excitedly) Are my eyes fooling me, or is this dim light fooling me with a vision of bliss! Madame, talk to me! When I was sick and alone in a foreign city and took to St. Mary’s Hospital, you were not the one who came to me like an angel from heaven, soothing my fever with sweet dreams of love and happiness? Are you not the one I lost and wept so bitterly?

On the one hand, Halloween provided a perfect backdrop for the whims of young Victorians. On the other hand, the age of reason was upon us, and the Halloween superstition was often looked down upon as an ignorant practice. As one lady said to console a neighbor who was too afraid to cook a silly supper and wait for his future wife to appear, “Don’t try, Mr. Oakly – if she’s not just going to be mad, but really of his body, to answer you, his love is not worth having. “

Don’t be fooled by the stark black and white photographs. The Victorians knew the way to fun, and Halloween was no exception.

What we now call Halloween was born out of the ancient Celtic harvest festival of Samhain and, therefore, the spiritual observance of All Hallows Eve. Scottish and Irish immigrants brought the vacation to North America in the mid-1800s, often celebrated with elaborate house parties.

At Grosvenor Lodge in London, we keep the tradition alive with an annual Halloween haunted mansion. This year’s event features an escape experience on October 25, 26, 27, and 30.

Guests are locked within the mansion and invited to find clues and complete challenges to escape. If you’re brave enough, you’ll visit every square inch of our property, from the spooky basement to the top floor landing. They will be volunteers to scare you around every corner!

To help you plan for a good old-fashioned scare, here are four things that may surprise you a couple of Victorian Hallo-ween.

Hallo-ween was a chance to make a match.

Today, Hallo-ween is all about candy, costumes, and kids. It was an opportunity to find love in Victorian times, as young men and women gathered for an evening of food, dancing, and frivolity.

Costumes were a must, even in the nineteenth century. Popular choices included ghosts, witches, bats, cats, and devils, as well as Little Bo Peep, Mother Goose, Harlequins, and Clowns.

Decorated Homes were to impress.

And no Victorian Hallo-ween party would have been complete without plenty of spooky candles and glittering Jack-o-Lanterns – named after an Irish trickster caught between heaven and hell after offending both the devil and God.

Candy was an afterthought.

Victorians loved their sweets, but nuts and apples took center stage on Halloween. Nuts were toasted, while apples were often glazed in a syrup of water, sugar, and butter before being browned over a bonfire – similar to today’s candy apples. Unmarried guests feasted on the “Hallo-ween Dump Cake,” which included a hidden ring, coin, and button. Whoever finds the ring would be married first. Finding the part meant a rich future; whoever found the button was destined to remain single.

Spooky games were a must.

The Victorians were are fascinated by spiritualism and the supernatural. Showtimes, Ouija boards, and ghost stories were popular forms of entertainment throughout the year, but especially on Halloween.

Young women are also enjoyed playing variations of the Magic Mirror game, where they stand in front of a mirror at midnight. If the spirits were happy, the reflection of their future husband would appear in the mirror. It sounds almost as scary as our escape room!